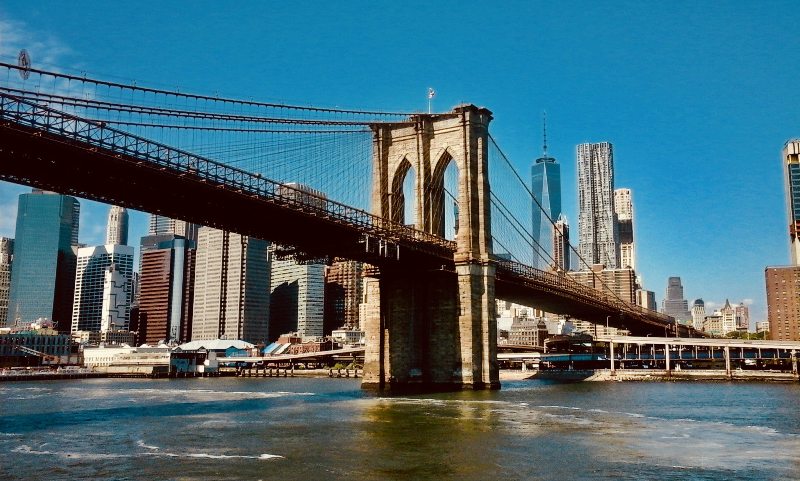 Structural steel is one of the most widely used materials in construction. We see it everywhere — from stadium bleachers to skyscrapers towering over downtown squares. There’s a reason steel makes for great construction material. The strength to weight ratio makes it a desirable material to work with and guarantees long-lasting durability.

While there are structural steel buildings of all shapes and sizes, there are certain structures that have made an impact on the world at large given their size and architectural beauty. As suppliers of structural steel, we have a deep admiration for structural steel firsts. That’s why we’re taking a look into the world’s first steel suspension bridge: the Brooklyn Bridge.

Constructing a Bridge Between Manhattan and Brooklyn

Two boroughs linked together by one mighty bridge. The Brooklyn Bridge is settled over New York City’s East River. It was designed by John Augustus Roebling, a German-born engineer who migrated from Berlin to Harrisburg, Pennsylvania where he found success in his work as a civil engineer. Roebling’s experience in helping construct bridges in Niagara Falls, New York and the Ohio River in Cincinnati, Ohio led him to propose a suspension bridge over the East River between Manhattan and Brooklyn. It would be the first steel suspension bridge with the longest span.

As construction was set to begin in 1869, Roebling was injured while taking a final compass reading across the East River. His feet were smashed by a boat and three weeks later he passed away from tetanus. Roebling’s then 32-year-old son stepped in as chief engineer and the project continued its course.

A Bridge Built by Immigrants

The entire construction demanded intense labor. Many immigrants, earning $2 a day, helped clear the land at the bottom of the river. Some workers developed caisson disease from the amount of gas they inhaled day in and day out. Others became paralyzed for the remainder of their lives. Despite these unfortunate accidents, construction continued and in May of 1883, the Brooklyn Bridge was ready for public view. It quickly became one of the most visited attractions in the world and was even dubbed the “eighth wonder of the world.”

On that first day of public use, approximately 250,000 people walked across it. John Roebling would have been incredibly proud as he designed it specifically for pedestrian enjoyment.

The total cost of the construction project was $15,000,000 and required over six hundred men to build it. Today, New Yorkers use it for their daily commute and tourists flock to it for photos and to take in the sights of being in between two distinctly beloved boroughs.

Fun Facts About the Brooklyn Bridge

On May of 1884, the famous showman P.T. Barnum led a group of 21 elephants over the Brooklyn Bridge to prove its strength and stability. Depending on its breed, an adult elephant can weight anywhere from 5,000 to 14,000 pounds. So that gives you some perspective!

At one point, there was a fee to cross the bridge. For one cent, you could cross by foot. For five cents, you could ride a horse across it. And for a whopping ten cents, a horse and wagon would carry you over! Farm animals in your party? If you had a cow with you, that would be an additional five cents while sheep and hogs were two cents each.

Moreover, in 2006, the New York Times reported that a Cold War bunker existed in the masonry foundations of the Brooklyn Bridge.

And if you’re wondering Why Brooklyn? Why not the Manhattan Bridge? Well, that’s because, at the time of construction (1883), Brooklyn was larger than New York City.

The Brooklyn Bridge: Made Possible by Steel

Roebling is credited with the genius idea of using twisted steel to build the bridge. Iron was used for the main building material while crucible-cast steel made it stronger. The durability of the Brooklyn Bridge is truly a testament to the power of steel. As structural steel suppliers, we know this to be true. Steel is the best material for construction projects because of its performance.

If you’re in need of structural steel for your next construction project, contact us!

« How is Structural Steel Created?
Why Steel Is Your Best Option In Residential and Industrial Buildings »